Much has been written about Sir Arthur Conan Doyle (ACD) over the years, and speculation has of course lingered on the name he gave to his great detective. Was it a famous cricketer, or a throwback to his old school companion Patrick Sherlock?
After much research* these facts have been uncovered in Ingleton, in the Yorkshire Dales of the UK.

Let’s start in 1876 when Mary Doyle (Conan Doyle’s mother) was a visitor at the residence of Bryan Waller, at Masongill. She was actually in Masongill when ACD returned penniless from Austria.

A look at the map below shows the location of Masongill and Ingleton. 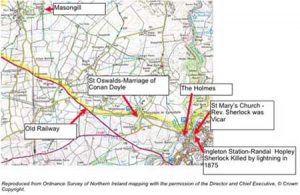 To get to Masongill the visitors of the 1870’s would take the train from Tebay or from Leeds. Ingleton stations were owned by The London and North West Railway on one side of the river, and Midland Railway on the other side. From either station, there was a horse and cart journey to Masongill, home of the Waller family.

The Wallers (John and William) were incumbents of St Mary’s Church Ingleton at the turn of the 18th Century (1764-1844), as is depicted on plaques and graves at the present Church. The Wallers of course had their ancestral home at Masongill.

The present Church was designed by an architect from Liverpool, one Cornelius Sherlock. The Vicar of the 1779 church building was a certain Revd Todd Sherlock (vicar from 1874-1879). By far the most Famous Sherlock at the time was Randal Hopley Sherlock (brother of the vicar) Struck and killed by lightning at Ingleton Station on August 9th 1875. It is not known if there was a plaque to Randal at the station, but there is certainly one in the church.

This would have been a much discussed story when Mary Doyle was a visitor at Masongill. Did Arthur know of the story before he started visiting Masongill, and eventually getting married to Louisa at the Church in Thornton in Lonsdale, a small hamlet situated between Ingleton and Masongill? Did He meet the reverend Sherlock? Were the Sherlocks at the wedding?

Talking of churches, Mary was a Christian who would have attended Thornton Church, and the Rev Sherlock also took services there, one of which was the for the funeral of Richard Thornton, Nephew of a well known local figure (ref. Richard Thornton School in Nearby Burton in Lonsdale). Mary Doyle would have been there at the funeral, as the Thornton family was well known in the elite circles of the day.
And what of the books timeline? A study in Scarlet was written in 1885, well within the timeline of the Sherlock family in Ingleton.

What of Holmes? Well the area below the church in Ingleton is known as the Holmes with Holme head farm still in existence. Did the name come from there, or remind him of Oliver Wendell Holmes as supposed.

The picture below shows the Sherlock window and plaque. 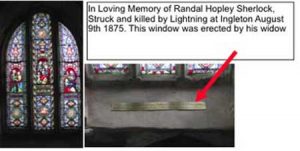